Should You be Concerned About Your Child’s Imaginary Friend? A Child Psychologist Explains 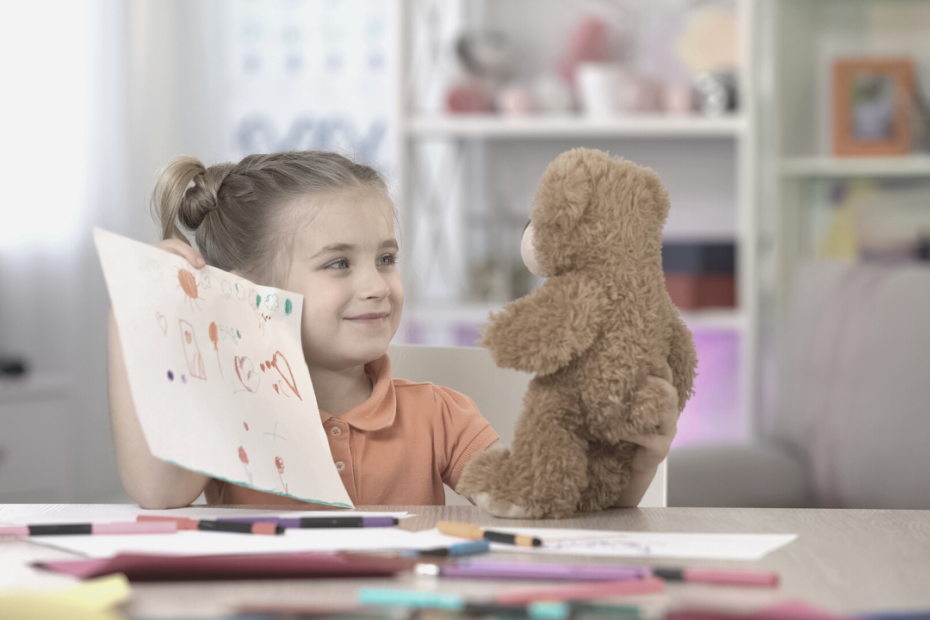 Children have the wonderful ability to conjure up exciting new worlds with their imagination, whether it’s chasing bank robbers through old western streets or cooking up delicious dishes with just one ingredient – mud. But every so often, their imaginations create a friend that seems to stick around. Many parents can become quite concerned after a while (perhaps because of all the ghost stories Hollywood has plied us with throughout the years). But is an imaginary friend really something worrisome or innocent childhood fun? Read this article before rushing to make an appointment with a child psychologist.

Is it normal for children to have imaginary friends?

Any child psychologist will tell you that having an imaginary friend is perfectly normal for children during their developmental years (usually between the ages of 3 to 11). In fact, studies have shown that before the age of 7, 65% of children would have or had an imaginary friend. These friends could be short-term (with new friends coming and going every couple of days). Or it can be one friend that lasts for years.

Why do children have imaginary friends?

This is the million-dollar question that the experts still haven’t been able to really pin down. Research has shown that there are a few things that play a role in whether a child will have an imaginary friend such as:

The difference between girls and boys

Although the reasons why children create these friends are generally the same across the board, the way they interact with these friends vastly differs between the genders. Girls tend to have much more nurturing relationships with their imaginary friends like puppies that need to be taken care of, a friend that’s thirsty etc. Boys on the other hand tend to partner with a friend that seems to be a bit more competent than they are such as a superhero or friend with magical powers.

The benefits of an imaginary friend

Imaginary friends actually have quite a few benefits:

Besides all these perks, imaginary friends actually aid in a few basic psychological needs as well. This is explained in self-determination theory. These needs are competence, autonomy, and relatedness.

Children can feel very competent with their imaginary friends. Parents will often overhear their kids trying to teach their friend something or listen to them boss their companion around.

Their imaginary friend gives them a sense of control. Whether it’s simply because the friend does whatever they want them to do or the fact that they can manipulate mom into setting another plate for dinner.

It might not be a real friend, but it’s still a friend – a so-called peer that whom they can relate to and connect with.

Can an imaginary friend have a darker side?

In short; yes. But definitely not in the evil spirit sense that Hollywood portrays. As we’ve already discussed in this article, an imaginary friend can be a way for children to process life and events. So, if Grandma died and the theme of the friend’s conversations has gotten stuck on death, it might be that your child is struggling with understanding and coming to terms with the loss. Or your child’s friends might suddenly start talking about very grown-up things and using lingo that is not age-appropriate and you know they certainly have not learned from you. In any of these instances, it is wise to schedule an appointment with a child psychologist.

When should I start becoming concerned?

Even when things are not quite as dark as a traumatic childhood experience or a mental illness, there are a few times when reaching out to a child psychologist can still be beneficial. These include the following:

Your child’s friend has a worrying backstory

It’s not unusual for children’s imaginary friends to have quite elaborate backstories. Some even come from completely different and complex worlds with an extensive family tree. But when their backstory includes things like a family that doesn’t care about them. Or having no friends. There might be something going on in your child’s life that they don’t know how to express. A child psychologist will be able to get to the bottom of it.

What could be handier than an imaginary friend that you can play with anywhere and at any time? But when your child is at school or has friends come to visit and still prefers the company of their imaginary friend there might be some social issues there. A child psychologist will be able to identify these issues and teach your child the necessary social skills.

When it wasn’t them

What could be more convenient than an imaginary friend that’s responsible for any/all mischief? And although it might be cute and funny the first time around, your child will soon learn to blame others and not take accountability for their own actions.

The imaginary friend is acting out

This is when the imaginary friend is apparently responsible for hurting friends on the playground, hurting your child (self-harm), and showing other violent or aggressive tendencies such as the destruction of property. When this occurs you should contact a child psychologist as soon as possible.

The imaginary friend is hurtful

There’s a big difference between acting out and simply being mean and hurtful. If the imaginary friend is suddenly being very hurtful towards others – whether not wanting to share or calling others dumb, your child might be lacking some social skills, be reacting to a change in their life, or not be able to express certain emotions in a healthy way. A child psychologist can help pinpoint the underlying issue and rectify the behaviour.

When the imaginary friend has incredible mood swings

It’s completely normal for us as human beings to have a wide range of emotions and moods, but to have every one of them in the space of an hour is not a good sign. If your child’s friend seems to be going through extreme mood swings in a short amount of time, it could be worth checking out at the child psychologist.

The imaginary friend sticks around into early teen years

Although having an imaginary friend is completely normal during developmental years, having an invisible companion from 11+ years of age is a bit of a stretch. That could be a sign of something more serious such as not having the necessary coping skills to deal with their daily lives. A child psychologist will be able to diagnose the problem, empower your child with the necessary tools, or refer you to another professional if the problem seems more serious.

How will this end?

Imaginary friends come to an end in a multitude of ways, some of which include just as much imagination as when creating them. Some simply disappear and are never mentioned again. Others meet an untimely end and will need some sort of funeral. And then there are the lucky ones who were called away on fantastical adventures. However your child’s imaginary friend “moves on”, be supportive, and be careful not to force them back by constantly asking where they are etc.

Imaginary friends can be insightful as to your child’s psyche, but for the most part, they will just be fond and funny memories to look back on. If you have some more questions or are concerned about your child’s imaginary friend, please don’t hesitate to contact us at info@personalonlinetherapy.com. Or simply complete the form below and we’ll get back to you as soon as possible.