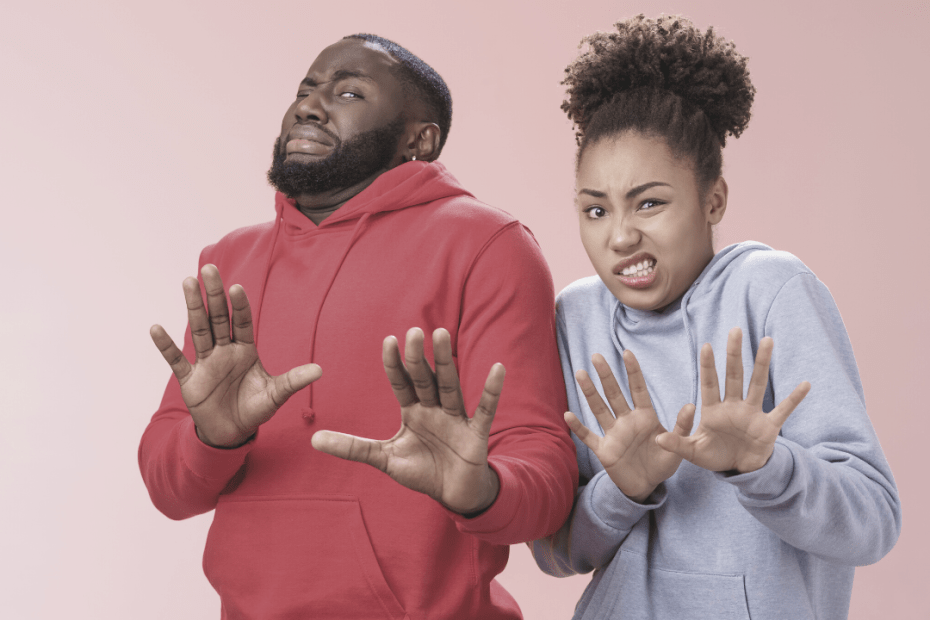 We all have dating horror stories and reasons for breaking up with someone. These can range from serious compatibility issues to simple sexual and attraction turn-offs. And this is a subject that often comes up during sex therapist sessions. What are the biggest turn-offs for men and women, am I guilty of any of them and are mine considered “normal”? Although we tend to steer clear of the word “normal”, we have found a few general turn-offs that are most prevalent amongst the genders. Let’s take a look…

These are some of the biggest turn-offs for women as often discussed with a sex therapist in no order of importance:

A man who mostly takes behind bedroom doors is a major turn-off for women. And though it’s standard practice that most men tend to climax before the woman unless some serious practice and discipline are at play, he should not “leave her hanging” just knock-knock-knockin’ on orgasms door. A selfish lover will very quickly see a reduction in his partner’s libido.

Rushing-through or Absolutely No Foreplay

For most women, sexual intimacy is not just physical and takes some mental warming up. Foreplay helps prepare women for sex both physically and mentally. Kissing, hugging, caressing and any other acts that get her “engine going” don’t just promote physical arousal, but also builds emotional intimacy, and makes her feel safe, more comfortable, and engaged.

Also don’t think foreplay only benefits the women. Most partners state that there is a clear difference between having sex with or without foreplay. And after experiencing both they’ll pick the mind-blowing latter every time.

It can be making basic comments such as “slower” or “there”. Or a specific kink or fetish the other person doesn’t know about or feel uncomfortable with. Human beings are incredibly sensitive to any form of rejection. And what may be given as requests, constructive criticism or just confusion, in general, might be misconstrued and taken personally.

To some, it’s that age-old idea that facial hair is a way to preserve crumbs of anything you eat for later. To others, it’s the red rash that they are left with over their face (and maybe some more private areas) from tender and passionate scratch…kissing. Whatever the reason, facial hair is definitely not for everyone, especially not in the bedroom.

For example, toys like whips are picked out very selectively by both partners to ensure an enjoyable experience and they make use of things such as safe words to let the other partner know when they start feeling unsafe or uncomfortable. Bringing any rough treatment into the bedroom without prior communication or consent is an absolute no-go. And the fact that this unexpected behaviour is a turn-off should come as no surprise.

A Terrible Sense of Fashion

It may be perceived as a pretty shallow take on dating, but it doesn’t take away from the reality of the matter. Women make fairly snappy assumptions based on their date’s attire. If she’s walking into the restaurant and sees a man with crocs waiting for her, she’s not going to be thinking “now, there’s a stud in the bedroom”.

Smelly body odour or stinky breath are a few of the turn-offs that claim top spot for both genders. With women, there’s an added element of men having long nails. Not taking care of yourself is definitely not going to have the desired result in the bedroom.

Here are a few of the biggest turn-offs for men as highlighted during sessions with a sex therapist:

This is a bit of a controversial point since it’s often rooted in personal and cultural beliefs. Most European and American men prefer their women shaven – all over. Men in countries and continents such as India and Africa, and many Middle-Eastern countries are not too bothered by women being shaved.

But what is interesting to note here is that the turn-off around body hair is growing – even in the places where they once cared very little about it. We believe that it is due to the penetration and influence of mainstream, European and American media such as magazines, ads and pornography.

Yes, men have this one too – we are all human, after all.

Talks about the ex, comparisons and detailed play-by-plays of sexual encounters do not belong in a new relationship and especially not in the bedroom. Not only does it leave men feeling inadequate but just downright cringy.

This is also a very interesting one since it’s not the actual tattoo on the lower back that’s the turn-off, but the connotation that comes along with it (that this is a woman that’s been around the block if you know what I mean). And this connotation has been set by mainstream media.

Once again, men have noses too. And unless there’s a kink or fetish that involves some stinky elements, terrible hygiene is never going to fly.

This might be a surprising one for most women. Especially since they put the make-up on in the first place to increase attraction. But a lot of men actually like women to look as natural as possible. During a sex therapist session, we often hear them recount dating stories where they arrived for the date only to find “the Joker” sitting at a table waiting for them.

This turn-off has layers to it because it’s counterintuitive to what most women have been led to believe (that they look prettier when wearing make-up). There can also be an underlying self-esteem issue (heavy make-up sometimes act as a mask). Or skill might be at play again with a woman simply not knowing how to properly apply her make-up.

Being Too Much of a Tomboy

So this one is another one that’s more for our heterosexual men. Most men don’t mind a woman with some tomboyish charm. In fact, they actually enjoy having someone around that can appreciate some of their manly interests. But if a woman starts being competition when it comes to the intensity of a rugby tackle, it becomes a problem.

There’s a difference between tomboyish traits and being downright butch. The entire reason a heterosexual man finds women physically attractive is for their femininity. So, a woman might look like she just came off the runway in Milan, but if she displays more masculine characteristics, that can be a big turn-off to heterosexual men.

Because snot isn’t sexy. Although cases where an individual’s nose is constantly running or they’re coughing throughout the sexual encounter is also not a particularly attractive trait to women, they seem to tolerate it a bit more than men.

A sex therapist will tell you that it’s likely because women generally have that more nurturing side to them. So she’s more likely to end up taking care of the man at the end of the night than just ordering him an Uber. But to men, the mere idea that this person is spreading bodily fluids (not the good sexual kind) and god-knows-what-else in their surroundings, is enough to keep even the hottest woman at arm’s length.

Turn-offs can range from the serious to the silly, but we all have them. If you would like to discuss turn-offs in more detail or have any questions regarding sex in general, please don’t hesitate to contact us at info@personalonlinetherapy.com or simply complete the form below and we’ll get back to you as soon as possible.